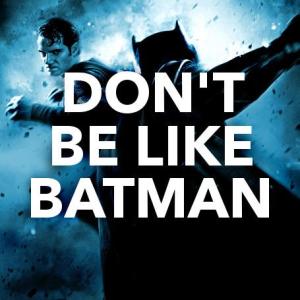 There are a number of odd things that take place in Batman v Superman – the jar of piss, the request to use the Daily Planet’s helicopter for personal use, the storytelling gaps wide enough for Doomsday to fall into – but the most egregious of all seems to be the one most overlooked.

It takes place right before the much-hyped fight.

It’s been nearly two years since the Battle of Metropolis (a new watermark for collateral damage) and Bruce Wayne has had it with the Man of Steel: he’s prepared a Kryptonite-tipped spear and has got his Batarmor shined and polished.

Everything’s set until he does the one thing that should trip him up more than anything Superman can throw at him: he works out.

And he doesn’t just work out; he works out hard.

He goes for the weighted belt pull-ups; he does some battle ropes; he even pushes his Batprowler sled. You could argue that much of this is some form of conditioning, but you could also argue that he’s doing what we’ve seen a number of heroes do before a big fight: get one last, pain-tinged, sweat-soaked workout in.

From a storytelling perspective, it makes sense: the man has to pump himself up for the big battle.

But from a fitness perspective, it makes about as much sense as a jar of Granny’s Pe…