Golden Rice, genetically engineered to contain beta carotene, has long been the poster child for the benefits of GMOs—as witnessed by this Time Magazine cover of July 31, 2000. 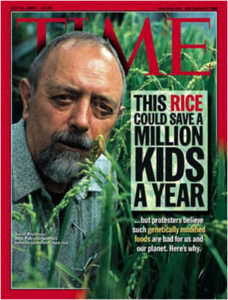 Beta-carotene is a precursor of vitamin A and the idea behind this rice was that it could—a conditional word expressing uncertainty—help prevent blindness due to vitamin A deficiency in areas of the world where this deficiency is rampant.

But vitamin A deficiency is a social problem.  Fruits and vegetables containing beta-carotene are widely available in such areas, but are not grown or consumed as a result of cultural or economic issues.  If they are consumed, people cannot absorb the beta-carotene cannot be absorbed because of poor diets, diarrheal diseases, or worms.

Here we are, 16 years after the Time cover, and Golden Rice is still not on the market.

I predicted its current problems in my book, Safe Food: The Politics of Food Safety, first published in 2003.  In Table 12 (page 158) I outlined the many basic research studies and research on production, consumer acceptance and use, and clinical effectiveness that would have to be done before Golden Rice could be shown to achieve its intended purpose.  Much of this research has now been done but plenty more still needs doing on getting it produced and int…